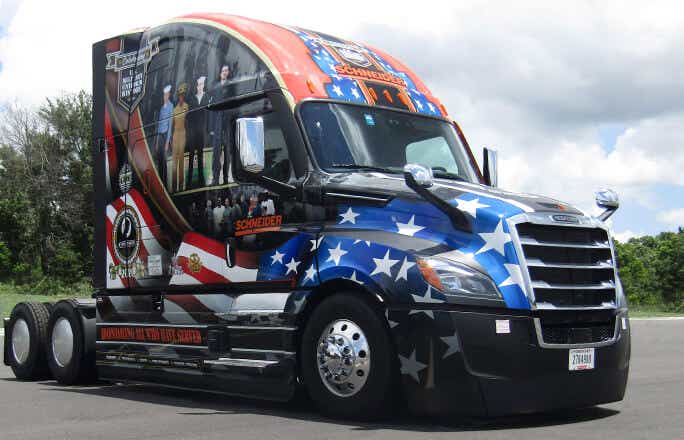 GREEN BAY, Wisconsin – October 22, 2020 – Schneider (NYSE: SNDR), a premier provider of trucking, intermodal and logistics services, announced Tom Lehr, a U.S. Marine veteran and Schneider associate, as this year’s Ride of Pride truck driver. He has since been traveling throughout the nation behind the wheel of a truck designed as a rolling tribute to members of the military.

Many military men and women defend their country but never get the opportunity to travel widely across the land they serve to protect. “Driving over the road has given me the opportunity to finally see the country that I had been protecting,” said Lehr. “Now I get to see it up close in all its glory.”

“Adding a new Ride of Pride to our fleet is always a special, tangible display of our commitment to those who serve – past and present,” said Rob Reich, Schneider executive vice president, chief administrative officer and U.S. Army veteran. “We are incredibly proud to have someone as professional and highly regarded as Tom Lehr, a million-mile-safe driver, behind the wheel of this year’s beautifully decorated Ride of Pride truck.”

Throughout the next year, the general public will see Lehr and the Ride of Pride on the road and at the annual Wreaths Across America event. “I’m excited for America to see the truck up close and personal,” said Lehr. “There are so many distinctive truck decals that represent the theme Military Uniforms Through the Years, and I’m excited to talk all about them.”

Schneider has been independently ranked as the top military-friendly employer in the trucking industry, and many in its fleets are veterans or actively serving in the Guard and Reserves. This contingent includes Lehr, who has been a Schneider professional driver and training engineer for 19 years.

A resident of Harlan, Iowa, Lehr spent much of his military life at Camp Pendleton, California, after enlisting in the U.S. Marine Corps. During his 22 years in the Marines, he was deployed overseas (serving in Japan, Korea and Australia) and trained hundreds of Marines in weaponry, anti-armor assault and more.

“The Freightliner team is proud to stand with our friends at Schneider to show our appreciation and gratitude to all of the brave service members who have worked or currently are working to protect our country,” said Richard Howard, senior vice president, on-highway sales and marketing, Daimler Trucks North America. “It’s a true honor to participate in the Ride of Pride program with our important customer, Schneider, and to watch the program continue to grow year after year.”

For more information on career opportunities with Schneider and the company’s commitment to those who have served in the military, please visit https://schneiderjobs.com/company-drivers/military