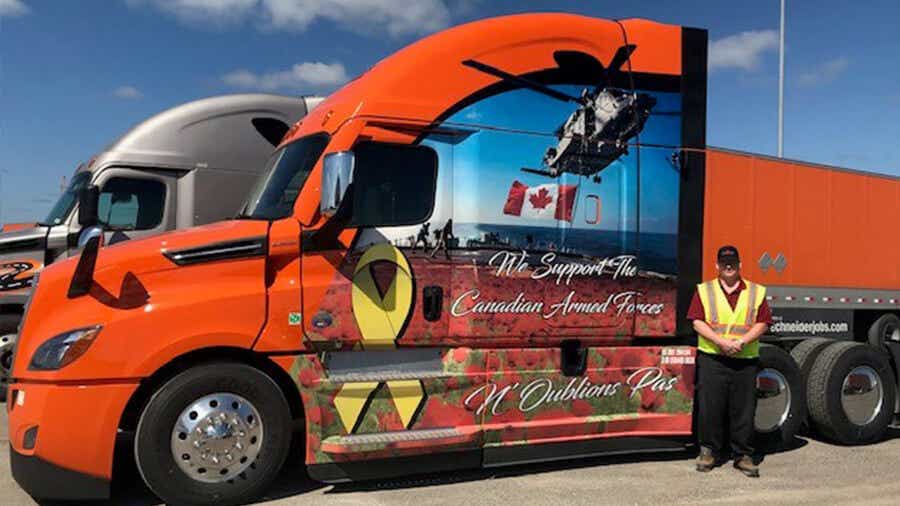 Schneider (NYSE: SNDR), a premier provider of trucking, intermodal and logistics services, is pleased to announce Michael Cunningham as the 2020 Canadian Ride of Pride truck driver.

Recognizing military veterans is a time-honored tradition at Schneider, which partners with Freightliner’s program to feature specially designed trucks intended to be rolling tributes to members of the military. Freightliner has presented Schneider with three Canadian Ride of Pride trucks, as well as 12 U.S. Ride of Pride trucks – the most awarded to any carrier – since the program began in 2001.

Cunningham, who is based out of Schneider’s Guelph, Ontario operating center, and has been driving with the company since 2011, was chosen as this year’s Canadian Ride of Pride driver for his dedication to the military and 10-year safe driving milestone.

He joined the Canadian Army part time while in high school before transitioning to full time after graduation. Cunningham spent five years in the Infantry before moving to the Royal Canadian Navy to serve as an Ordinary Seaman on the HMCS Yukon.

After more than nine years of service and later factory work, the Hepworth, Ont., native decided to pursue a professional driving career. “I was just going to try it,” Cunningham said. “But I’ve been really happy, so I’ve stayed.”

He also served as Schneider’s 2017 Canadian Ride of Pride driver. “It was a remarkable opportunity to previously captain the Ride of Pride,” Cunningham said. “It’s an honor to be able to do so again, hearing new stories and sharing mine – it’s exciting.”

Cunningham also provided input to inspire the truck decal design. Both sides of the truck feature a field of poppies to symbolize fallen soldiers, the Canadian flag and the yellow ribbon of remembrance with the motto “Lest We Forget” in both English and French. A Cyclone helicopter and CF-18 Hornet fighter aircraft are also featured on the truck.

“It’s not every year that we get a new Ride of Pride added to our Canadian cross-border fleet, so when we do, it’s extra special,” Schneider Executive Vice President, Chief Administrative Officer and U.S. Army veteran Rob Reich said. “We are incredibly proud to have our talented, 10-year-safe-driving-milestone-holder Michael Cunningham behind the wheel of this year’s decorated Canadian Ride of Pride truck.”

Schneider has been independently ranked as a top military-friendly employer in the trucking industry, and many in its fleet are veterans or actively serving in the U.S. Guard and Reserves or Canada’s Regular Force and Reserved Force.

For more information on career opportunities with Schneider and the company’s commitment to those who have served in the military, please visit schneiderjobs.com/truck-driving-jobs/military.