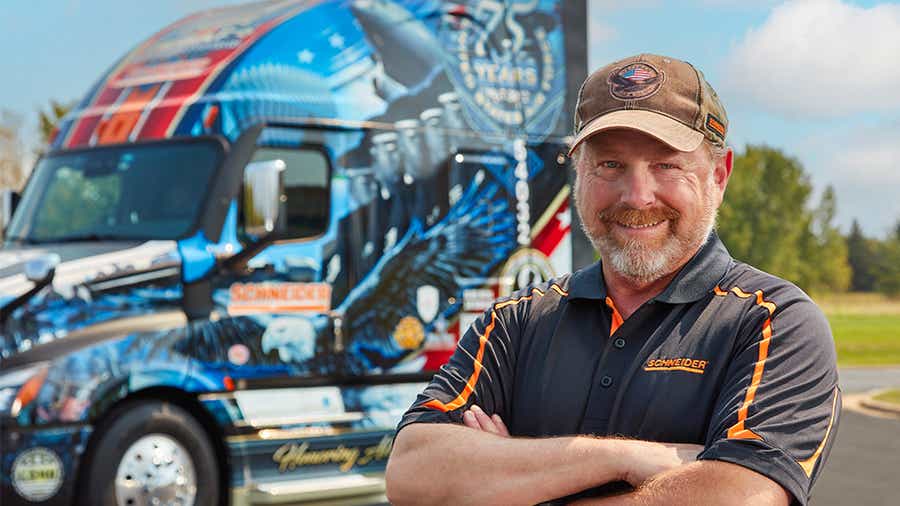 Ride of Pride is Schneider’s specially decorated fleet of trucks, a time-honored tradition for veterans in the trucking industry. Over the years, Schneider has received 14 Ride of Pride trucks – the most awarded to any carrier – from Freightliner since the program began in 2001.

“I am honored beyond belief to be one of Schneider’s Ride of Pride drivers and not only represent the company but also represent veterans and those in active duty. It shows we appreciate the sacrifice people have made and continue to make,” shares Waggoner.

Schneider has been independently ranked as a top military-friendly employer in the trucking industry and almost 14% of current associates come from a military background.

During his two-part Army tenure, Waggoner served tours in Iraq, Bosnia and Serbia, also spending time in the U.S. Virgin Islands after Hurricane Hugo to assist with natural disaster relief and humanitarian aid.

After retiring from the Army, Waggoner earned his CDL and joined Schneider five years ago.

“Schneider stuck out to me because they offered an apprenticeship program sponsored by the VA,” said Waggoner. “They also credited my driving experience in the Army, and I was able to start with ten years of driving experience which increased my starting pay.”

Waggoner will participate in major events across the United States like Wreaths Across America.

For more information on career opportunities with Schneider and the company’s commitment to those who have served in the military, please visit https://schneiderjobs.com/company-drivers/military.