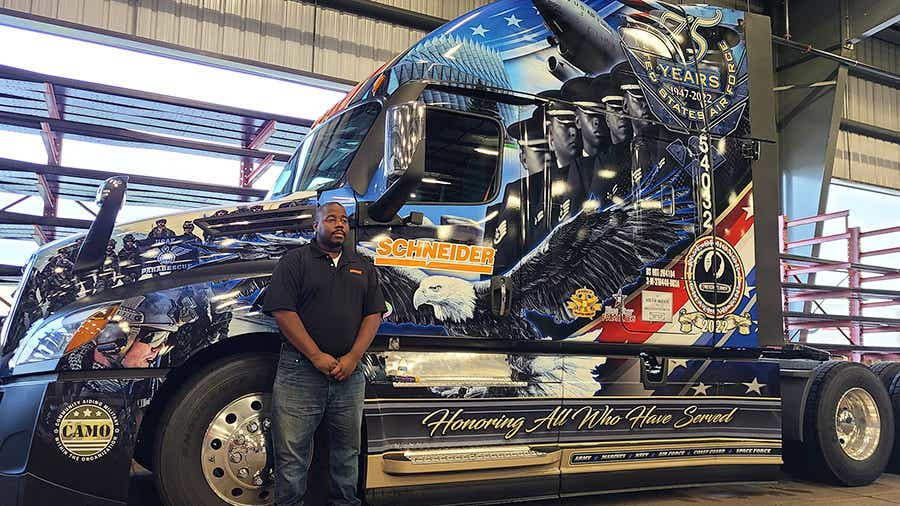 Update: Schneider driver and Training Engineer Joseph Morning passed away shortly after receiving the Ride of Pride truck and following the publication of this article. Please keep his family and friends in your thoughts as they go through this difficult time.

Recognizing military veterans is a time-honored tradition at Schneider. The company works with Freightliner on the program, which features specially designed trucks that act as rolling tributes to military members. Freightliner has presented Schneider with 14 U.S. Ride of Pride trucks – the most awarded to any carrier – since the program began in 2001.

Morning received his new truck on Friday, May 27. He has since been traveling throughout the nation behind the wheel of the truck, which honors the 75th anniversary of the United States Air Force.

“When I saw the truck roll down the line, especially with many veterans there, it was one of my top life experiences,” said Morning. “It was surreal. I had a lot of mixed emotions.”

Throughout the next year, the public will see Morning and the Ride of Pride truck on the road and at the annual Wreaths Across America event in Washington D.C.

“I look forward to meeting other veterans at Schneider and across the country,” said Morning. “Most importantly, I’ll get to be a part of Wreaths Across America. My first Sargent Major is at Arlington. One of the greatest honors would be to be able to deliver wreaths there to honor him and those who gave the ultimate sacrifice.”

Schneider has been independently ranked as a top military-friendly employer in the trucking industry, with nearly 14% of its associates having military experience.

“Being a truck driver is almost the equivalent of being in the military to an extent,” said Morning. “You have to be able to take care of yourself and other people around you, and you need to be aware of your environment. I feel that having those skills and transferring them over to truck driving worked out very well.”

Morning has worked for Schneider for three years. He spent four years in the Marine Corps and currently serves in the California National Guard. Morning has been deployed overseas five times (serving in Iraq, Afghanistan and Japan).

Outside of his work with Schneider and his California National Guard duties, Morning enjoys creating videos with his drone and sharing the clips on social media.

“We are incredibly proud to have someone as highly regarded as Joseph Morning behind the wheel of this year’s Ride of Pride truck,” said Schneider Executive Vice President and Chief Administrative Officer and U.S. Army veteran Rob Reich. “Adding a new Ride of Pride truck to our fleet is always an exciting time and displays our dedication to those who serve. We are committed and honored to provide opportunities for veterans and current service members.”

For more information on career opportunities with Schneider and the company’s commitment to those who have served in the military, please visit https://schneiderjobs.com/company-drivers/military.