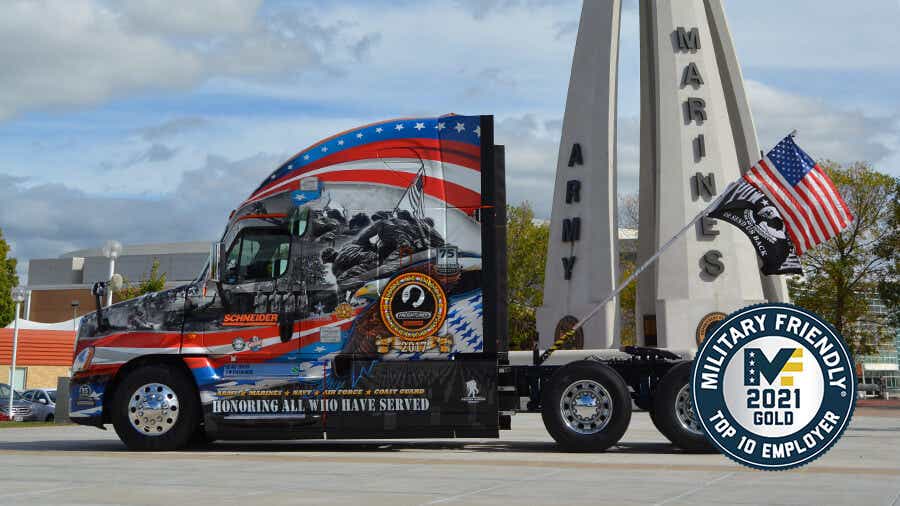 GREEN BAY, Wisconsin – November 11, 2020 – As Americans celebrate Veterans Day, Schneider (NYSE: SNDR) is honoring the thousands of current service members and veterans who call the premier provider of trucking, intermodal and logistics services home. Approximately 22 percent of associates hired by Schneider have a military background, and this commitment has not gone unnoticed.

Schneider has again been named to Military Friendly’s list of military friendly employers. The company is ranked in the top 10 and received the highest award level in the industry. Schneider is celebrating a Military Friendly designation for the 18th time.

Since being founded in 1935 by Al Schneider, a longtime member of the National Guard, the company has recognized that individuals with military backgrounds are dedicated, goal-oriented team players who get the job done. Today, Schneider continues to provide rewarding career opportunities to truck drivers, diesel technicians and warehouse and office associates from both the military and civilian ranks.

“On Veterans Day, we honor our country’s military veterans for the brave work they’ve done to protect our country,” said Rob Reich, executive vice president, chief administrative officer at Schneider and U.S. Army veteran. “Providing veterans with rewarding civilian careers at Schneider is just one of the many ways we at Schneider show our respect and gratitude.”

Veterans often find that Schneider’s company core values – Excellence, Integrity, Safety and Respect – align with their own. The skills that are required to be successful at Schneider are similar to the skills that veterans developed in the military, including responsibility, safety and teamwork. Additionally, Schneider offers other benefits exclusive to military, such as a military apprenticeship program and the option to convert military experience to driving experience credit.

Another way that Schneider shows its support of military veterans is through its Ride of Pride program. For the 12th year, Freightliner has presented Schneider with a special military-themed truck. The truck, which is piloted by a veteran driver, becomes a rolling tribute to the U.S. military.

Learn more about Schneider’s benefits and programs and career opportunities for those with military experience at Schneiderjobs.com.

Schneider is a premier provider of transportation and logistics services. Offering one of the broadest portfolios in the industry, Schneider’s solutions include Regional and Long-Haul Truckload, Expedited, Dedicated, Bulk, Intermodal, Brokerage, Warehousing, Supply Chain Management, Port Logistics and Logistics Consulting.