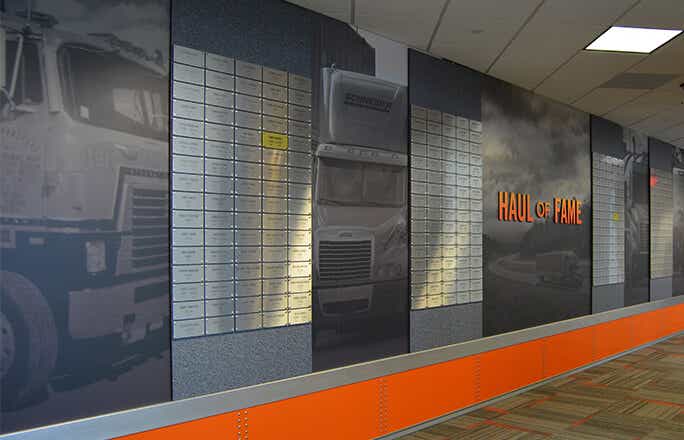 Throughout February and March, Schneider will host 17 award banquets across the U.S. and Canada to celebrate these special drivers who have safely reached thousands of customers across millions of miles without a single accident.

“Schneider simply wouldn’t succeed without the skill and commitment put forth by our professional driver force,” said Tom DiSalvi, vice president of safety, driver training and compliance at Schneider. “These awards give us a chance to celebrate and honor those who embody our core values every day of the year and every mile on the road.”

The prestigious honor of induction into Schneider’s Haul of Fame is reserved for drivers who have accumulated at least three million safe driving miles and/or 20 consecutive years of safe driving without an accident. This year, 25 drivers met the criteria for the first time, earning them membership alongside over 300 of Schneider’s elite drivers. Each inductee will have a commemorative plaque installed on the Haul of Fame wall at Schneider’s corporate headquarters in Green Bay, Wisconsin. Among this year’s honorees, 12 members will have their Haul of Fame plaque updated to reflect a higher level of safe miles achievement.

The Million Mile Award is an honor earned by Schneider drivers who have transported freight over one million miles while remaining accident-free. This year, 62 new inductees are joining the ranks of 6,229 Schneider million milers, which amounts to billions of miles driven without a single accident.

Professional drivers who are interested in earning a spot in the Haul of Fame can visit SchneiderJobs.com to explore available career opportunities.

With nearly $5 billion in annual revenue, Schneider has been safely delivering superior customer experiences for over 80 years.